The Balkans nature is one of the most preserved of Europe, and Kosovo is not exception: extraordinarily rich in plant and tree species, the vegetation of Kosovo represents 25% of the Balkans flora. Here is a fast overview of the number of species you can find in that part of Eastern Europe:

– around 2800-3000 species of vascular plants (plants with a stem, roots and leaves) have been found and 139 plant associations

– 227 plant species growing in Kosovo are Balkans endemic, which means they can only be found in the Balkans.

That diversity is due to physical factors: combination of soil types, elevation and microclimates leads to a wide variety of habitats. Most of those habitats have been driven to the south during the ice age periods. Kosovo is an important centre of Balkan and European biodiversity. In particular:

–> Prokletije Mountains/Bjeshket e Nemuna in the west, protected as a national park since December 2012.

– At the foot on Sharr Mountains, you will see wonderful oaks, chestnuts and beeches forests. Unfortunately, the centenaries ones are getting rare and rare, being mainly used for building houses and flats.

– Up to 1800 meters and above, the trees give way to vast pastures where it is not rare to see ships or even goats.

– At the top on the mountains, you’ll see rocks and tundra, where the panorama is incredibly beautiful.

It exists also in Kosovo a great variety of plant association (139 in Kosovo), which are groups of plants growing only together. They are today threatened because of human action, especially the oak forests, harvested for firewood and cleared for agriculture. Two rare subalpine pine species are limited to small areas & are vulnerable to wild fires. Moreover, wetlands, which are the most productive places on Earth and the birthplace of ecological diversity providing water to numerous plants and animals, are rare in Kosovo.

– Sharr Mountains is one of the most important Balkan and European centre of high-mountain endemism (around 200 endemic and sub endemic species = species, subspecies and varieties).

– 1558 plant species have been recorded in the National Park of Sharr Moutains, among which 41 considered as particularly rare or sensitive and 12 Kosovo endemics.

– 76 medicinal plants species, mainly wild, have be found in Sharr Mountains. Some examples :

* the Sideritis scardica is a Balkan endemic plant you can find up in the mountains, mostly on the Macedonian side of the Lubotan Mountain. This herb has a slow reproduction and is moreover overused mainly for producing green tea, especially in Greece.

* Very renown in Kosovo, the saffron offers plenty medicinal properties: it protects against around 600 diseases, especially depression and mental illnesses. According to the legend, that plant would bring wisdom and joy to the one who uses it regularly. The saffron is also known for its numerous virtues for human body (digestion, nervous system, cramps, asthma, etc.) In Shar Mountains, you usually find it right after the snow has melted. 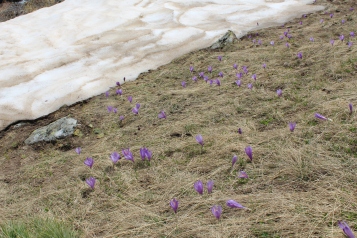