Water moulds the landscape of Sharr National Park. The main geomorphological influence in recent history here, the persistent flow of numerous streams, rivers, and waterfalls carve out valleys and canyons.

Almost the whole territory of the park drains into two large rivers: the Lepenc/Lepenac in the north-east part of the mountain, passing through the main skiing paths of the Sharr Mountains, and the Lumbardh/Bistrica in the south-west. As it progresses from its source from the slopes of Ošljak/Oshlak peak (above the village of Sevce, Štrpce/Shtërpcë municipality), the Lepenc is fed by several tributaries: Suvi potok/Lumi i Thate, Murzhica, Durlov potok/Procka e Durlës, Blateštica/Bllateshtica, Bolovanka/Bolonjska and Kaluđerica/Kalugjerica. These fast-flowing rivers drain the highest mountains in the southernmost areas of the National park.

The major part of the Lumbardh/Bistrica river basin, meanwhile, springs from the high mountains of Maja e Zeze / Crni vrh, Kobilica and Karanikola. Their upper waters too are very rapid. These springs and upper parts of watercourses create special ecosystems, with a range of wetland habitats such as marshes and fens.

Glacial lakes are one of the most important natural assets of the national park. These have formed when thousands of years ago when the glaciers have changed the landscape and then started melting, thus filling the wholes with water that nowadays are known as lakes. At around 1,900 m above sea level, there are several lakes known for their beauty and size, including Livadica Lake (Štrbačko or Livadičko jezero in Serbian and Liqeni i Livadhit in Albanian), Jazhince Lake (Jažinacko jezero/Liqeni i Jazhincës), Gornjasela, Karanikola, Miskova, and Bezdanka lakes. As important as they are to the region, further studies are still required to understand the ecology of these lakes. 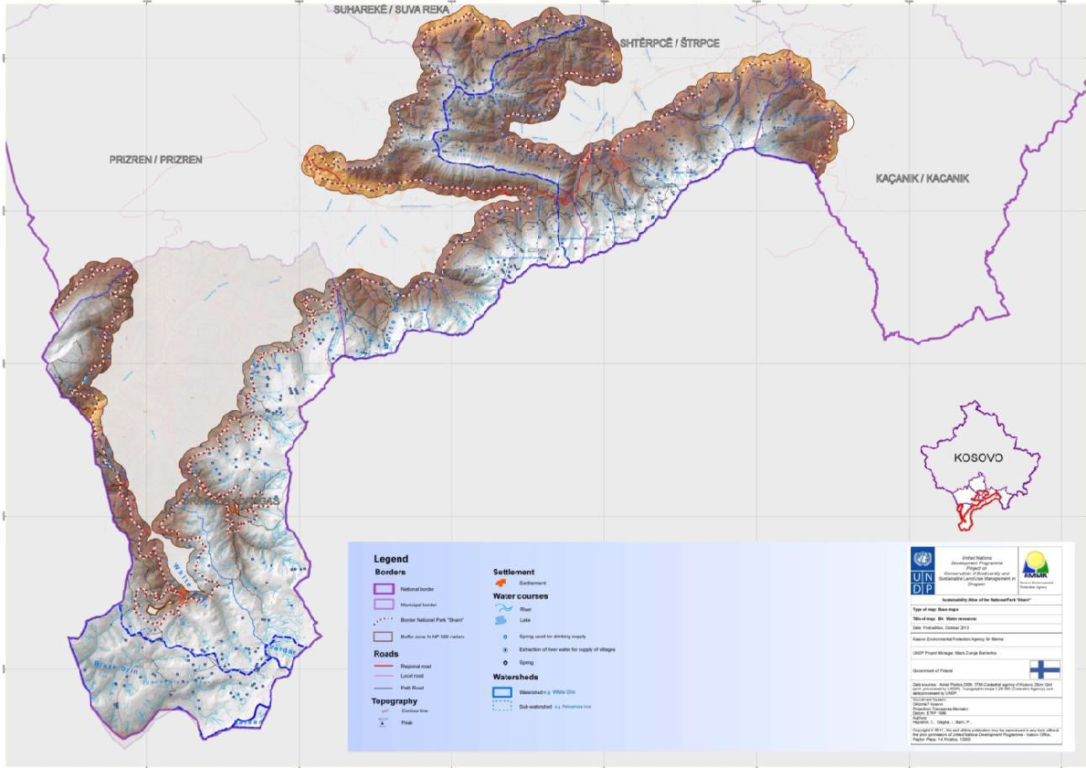 Water as an Economic Resource

You can find clean water throughout the national park, with the water quality at higher elevations being especially good. Many areas here are served by multiple springs, which are not only important ecologically, but as a water source for livestock and for surrounding communities.

In fact, the municipalities around the park depend to a large extent on the Sharr Mountains for water, both from springs and surface water. For these communities, the provision of potable water is crucial. However, this often comes at a cost: localised pollution occurs around livestock watering places, and around developments and settlements.

With increasing numbers of (largely seasonal) inhabitants and tourists to the mountains, there is more and more demand for water, but infrastructure is often sorely lacking. Holiday houses and tourist facilities are supposed to have a septic tank, for example, but many do not. Resultantly, large volumes of wastewater and sewage flow onto the land and into watercourses. The happens most during the busy winter ski season. Most of the villages in Sharr are also lacking proper sewage and water filtration systems.

On a larger scale, climate change and extreme weather leads to a disruption of water supplies and to further mismanagement of water resources. In order to face climate change, energy and water systems have to adapt, although how we go about this can be a source of controversy. Will Sharr National Park, following a trend across the rest of the Balkans, soon be covered in controversial small hydropower plants (that generate small amounts of ‘green’ energy at the expense of river ecology)? The outcome depends on the people here, as well as local and central government and the European Union.

More about the destructive power of supposedly green hydropower, you can find on the Bankwatch webpage.

There are many agencies and individuals dedicated to protecting the waters of the Sharr Mountains. Notably, Sharri National Park Directorate have a water and climate officer. Other responsible governmental institutions are the KHMI (Kosovo Hydrometeorological Institute), the Water Directorate and East Hydro Region Directorate. There are also a small number of NGOs and activists actively working on these issues like Balkan Green Foundation, ERA.

Broadly speaking, across all these organisations, the main targets are:

Promisingly, The Ministry of Environment and Spatial Planning, which is responsible for the development of Sharr National Park on a top level, has included water protection in a management programme entitled Biodiversity, Environment and Landscape. They hope to protect and maintain the water resources of Sharr National Park with the following actions:

Following protests and public pressure the Ministry of Environment and Spatial Planing has put a moratorium on constructing small hydro power plants. Until when the moratorium will last and what will be the next steps of the responsible institutions, for us stays unclear.

Text prepared by Wiebke Tebbe, short-term EVS volunteer in Listen to the Pines of Sharr